The 1967 death of starlet Jayne Mansfield led to implementation of the rear impact guard on tractor trailers. She, her lawyer, and driver were killed after rear-ending a semi. Despite this important change to the design of large trucks, it does not always prevent accidents or the need for semi-truck towing services.

On Tuesday, August 16, 2022, Baker & Baker received a call for semi-truck towing along southbound I-5. The semi-truck towing road crew responded to mile marker 274 just outside of Woodburn, Oregon to find a semi-truck vs. multiple car crash.

While traveling at a high rate of speed along the interstate, the truck driver felt an impact at the rear of the truck. It turned out that the front of a passenger car had been pushed underneath the rear trailer axles, causing a multi-car crash.

Fortunately, all of the individuals involved were unscathed. However, the flow of traffic was stopped until our semi-truck towing team arrived. We quickly assessed the damage and got to work clearing the crash and rendering semi-truck towing services.

In the midst of the crash, the impact compromised the integrity of the trailer’s rear axles. This presented a difficult challenge, but luckily, our highly skilled semi towing crew knew exactly how to handle it. We first used the winch on our heavy duty tow truck to pull the axle forward. From there, chain binders held the axle in place while we attempted to straighten up the frame as much as possible.

As luck would have it, the crash occurred right before the weigh station.  Baker & Baker provided semi truck trailer towing to the weigh station where logistics were discussed. It was decided that the trailer would be taken to our Woodburn towing yard while the transfer of the load was coordinated. The trailer remained here for five days before we again provided semi truck trailer towing to a warehouse in Portland, Oregon that specializes in load transfers.

Even though this could have been a deadly situation, all were uninjured and a quick resolution was found. Baker & Baker is happy to provide semi-truck towing services to Woodburn, Oregon and surrounding areas. 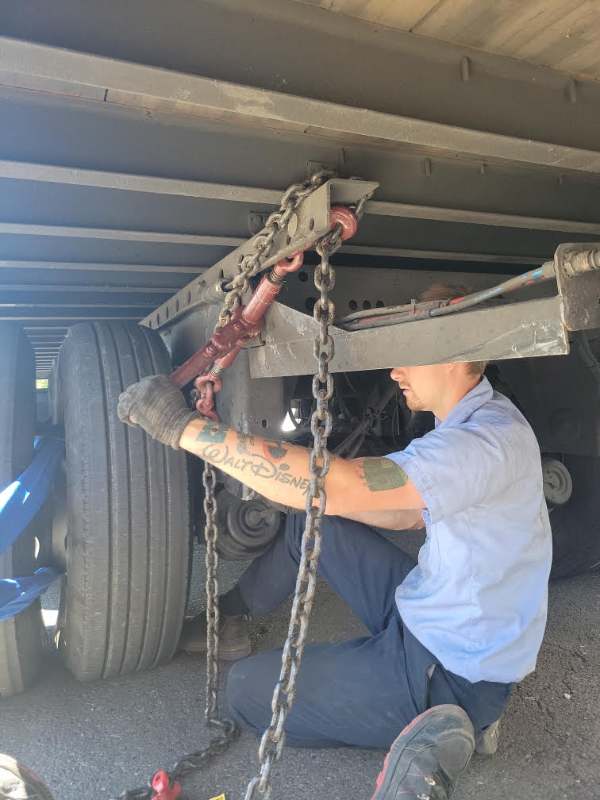 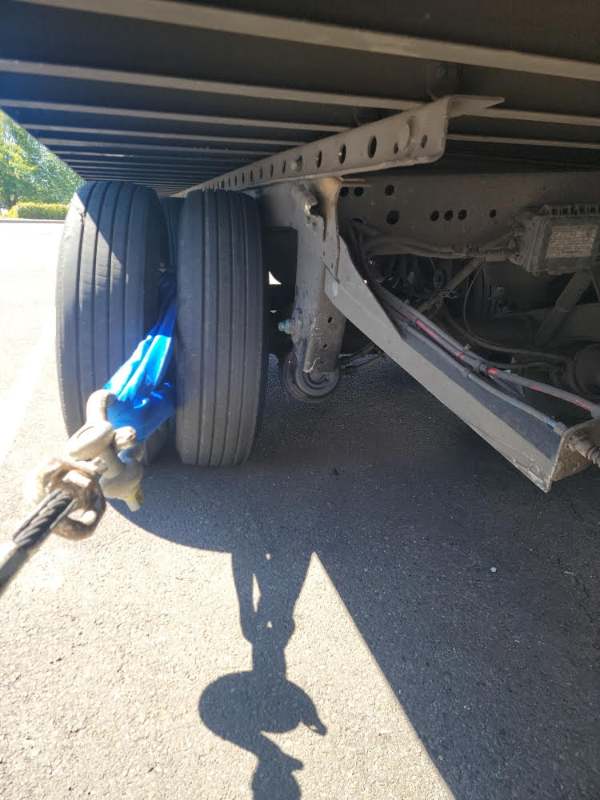 Because the car was pushed up under the rear trailer axles, the frame was severely damaged and bent. This proved to be the biggest obstacle of this semi truck towing job as the compromised frame made it extremely difficult to tow.

To combat this, the semi truck trailer towing technician attached the winching cable to the axle to pull it forward and more in line with its rightful position. Next, chain binders were used to hold the axle in place while the semi truck towing team straightened the frame as much as possible.

After five days, the team again provided semi truck trailer towing to a warehouse in Portland that specializes in load transfers. Fortunately, all of the individuals involved in the crash were not injured and we were able to count this semi truck towing job as a complete success.