While trucks are normally properly loaded at the beginning of their journey, all it takes is one sudden braking event and the load can all shift forward! This throws the weight distribution of the load off and puts too much weight on the drive axle underneath the trailer hitch. While this happens less frequently with palletized loads, the load shift team has become accustomed to helping shift paper rolls, lumber, and steel beams at the scales.

On this particular occasion, the truck was transporting larger 4000 lb paper rolls. The truck driver had to brake suddenly when a car merged into his lane and this caused the rolls to shift forwards. This caused a weight distribution that was immediately picked up by the scales in Woodburn which happens to be the southbound port of entry for the state of Oregon.

The heavy load shift team had to shift each of the 13 paper rolls ever so slightly back into position. One at a time, they wrapped straps around the paper rolls and slowly slid them to the correct position. Once they believed that weight was properly distributed, the load shift team stood by as the driver passed through the scales once more.

Thankfully, he passed on the first time! Should he have not passed, the Baker & Baker team would have done the necessary adjustments to the load. They will not leave until their client has been cleared!

Great work out there team! You managed to move 52,000 lb of paper rolls back into place without breaking a sweat! Keep up the good work! 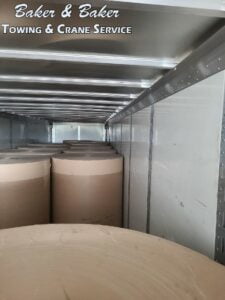 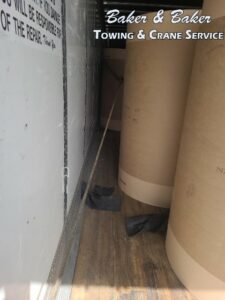 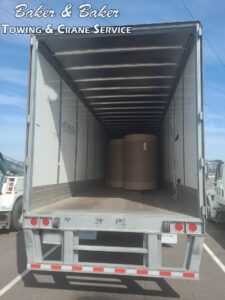 Once they arrived at the scales, the load shift team assessed the situation. The truck was carrying 13 rolls of paper, each weighing 4000 lb. The paper rolls had shifted during transport and the weight of the load was now unevenly distributed especially towards the drive axle underneath the trailer hitch.

The load shift team wrapped a strap around the first roll of paper and carefully winched it back into place. Once they had done the same with all 13 rolls of paper, the team stood by as their customer drove through the scales on more time. Once the customer cleared the scales, the heavy load shift team headed back to the Baker & Baker office to await a new call.