Tow Truck Called for Vehicle Stuck in the Mud … The Joys of Oregon Winters!

Oregon residents know that the likelihood of calling a tow truck increases during the winter months. While roads may look drivable, residents know that under the snow and leaves there is often soft, muddy, and unsteady ground which can lead to their vehicles getting stuck on the road.

This unfortunately happened to the driver of a Ram ProMaster. In the dead of winter, on January 18, 2022, Baker & Baker Towing Service received a call from the Marion County Sheriff’s Office requesting a tow truck.

The unlucky ProMaster driver  was in St Paul, OR on a non-gravel, packed earth driveway that was covered in leaves. Unable to see the muddy and soft ground, the driver made his way onto the road, lost traction, and ended up stuck and unable to move.

Hit hard by winter weather every year, it is difficult to drive safely in the state of Oregon during the winter months. Although it may look like it’s easy to drive through the road, the inclement weather causes the road to become very soft. Unfortunately, these types of roads are really not drivable during the rainy and winter seasons and many people end up calling tow trucks.

The Baker & Baker Towing Service team promptly arrived on the scene and factoring their weight calculations prior to commencing the winch-out, they were able successfully pull the vehicle out backwards. Impressively, the crew was able to get the vehicle back on the road within 15 minutes! Great work to the tow truck team!

Baker & Baker was proud to help out a stranded motorist once again, and to be of service to our local community. Thank you to the Marion County Sheriff’s Office for entrusting the help of the Baker & Baker team! 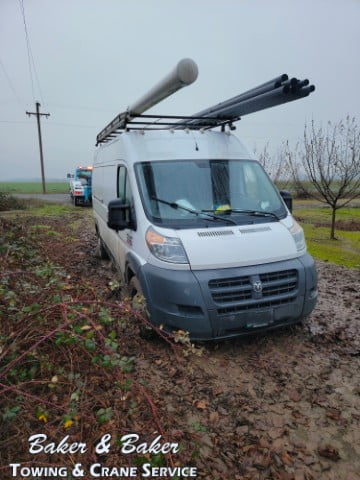 There were leaves covering the road so the driver wasn’t able to see the muddy and soft ground. Because of the lack of traction and the lack of firm ground, the vehicle had gotten stuck and was unable to move. He knew that he needed to call a tow truck company to help him out.

Tow truck company, Baker & Baker promptly arrived at the location in St Paul, OR and set up on the shoulder. Since they were pulling the vehicle out of the mud, they had to factor that into their weight calculations prior to commencing the winch-out. The tow truck crew pulled the vehicle backwards, and the car was back on the road within 15 minutes.