Baker & Baker responded to a call for a crane tow service at a local farm. The farmer in question needed help to lift a silo as he was moving it to a new location on his property. Silos are most commonly used for storing grain, coal, and food products in bulk. This particular farmer used his silos to store grain.

The crane tow service team made their way to the farm, bringing their 15 ton crane along with them. Once at the farm, the team had to figure out how they were going to lift the silo as safely as possible. The silo itself was lying on its side, which made it much easier for the team to find the hidden hook points inside the silo!

Once they ascertained that the lift points could support the weight of the silo, the crane service team passed the straps through an opening at the top of the silo and hooked onto them. From that point on, the crane did all the heavy lifting! The farmer was extremely prepared for this lift and had already put the footings in place. All that was left for the crane tow service team to do was to move to silo to where the farmer specified.

Fantastic work out there team! 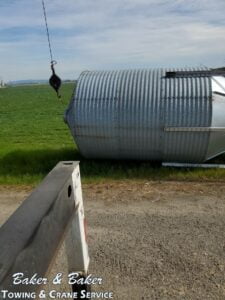 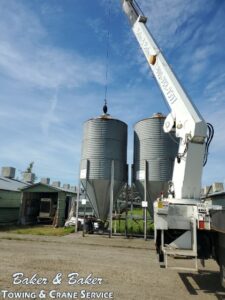