The Marion County Sheriff’s Office requested a truck towing service out on Monitor McKee Road NE in Woodburn, OR. Imagine this landowner’s surprise when he found an abandoned Ford F250 in his pond! The police were on the scene within minutes of receiving the call from the landowner.

It was apparent that the truck had crashed through a guardrail, went down an embankment, and ending up in the shallow murky pond. When the police first arrived at the pond, they had no way of knowing if the driver of the vehicle was submerged with his truck.

Their dive team quickly ascertained that there was nobody in the pond and that the truck driver had evidently gotten out of his vehicle and left the scene of the accident. The driver was later located and stated that he had crashed through the guardrail when avoiding an animal on the road.

The dive team stayed behind to assist Baker & Baker with the recovery of the F250. Seeing as they were already in wet suits, they helped the towing hook their winch cable onto the Ford’s hitch. With the scuba divers giving them the all-clear, the towing team slowly began to winch the truck out of the water with their 50 ton wrecker.

While the truck was initially lying on its side, the pulling motion caused it to upright itself during the winching process. Once the truck was safely out of the water, the truck towing service team winched it onto an awaiting flatbed.

It was a pleasure, as always, working with the Marion County Sheriff’s Office. Thank you for trusting Baker & Baker Towing & Crane Service with this recovery! 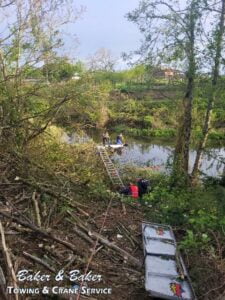 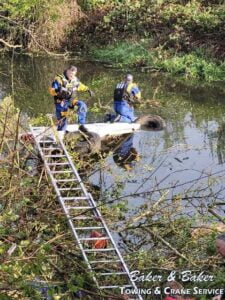 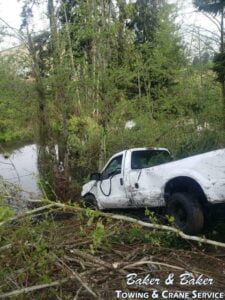 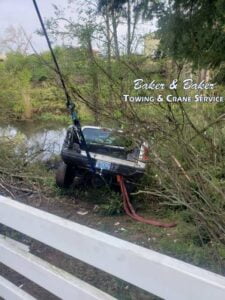 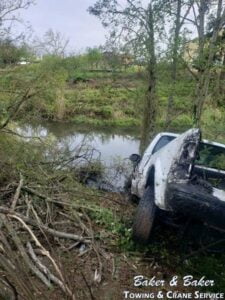 The team made the 5.9 mile journey in less than 15 minutes. The truck towing service team had dispatched both a 50 ton wrecker as well as a medium duty wrecker. While the 50 ton wrecker would have sufficed, it is always better to have more manpower on the scene when you’re responding to an emergency call.

Once the truck was completely out of the water, the heavy duty recovery team winched it onto an awaiting flatbed. The truck towing team brought the drenched F250 back to their secure lot for storage.